By The COVID World

Back in November, The COVID World published an article with 11 world-class athletes who had either died or became injured shortly after receiving the COVID-19 vaccine. We did not anticipate that things would be so bad, that merely two months later, there would be enough stories to make another list.

However, what follows is yet again a list of 11 world-class athletes from around the world that have either died or been left injured in recent months after receiving the COVID-19 vaccine.

Cape Verdean football player Ricardo Gomes collapsed during a training session in December last year and was rushed to hospital. The 30-year-old, who plays for Serbian football club FK Partizan Belgrado, had received the COVID-19 vaccine just six weeks prior to the incident.

The head coach of the team, Aleksandar Stanojevic, was quoted saying after the incident:

“He [Gomes] collapsed in training and the situation is extremely serious.”

Gomes, who is considered one of the best players in the Serbian Super Liga, received his COVID shot in October last year along with teammate Quincy Menig and coach Stanojevic, who personally took the Cape Verdean international to the vaccination site allegedly because he was reluctant to receive the jab.

Brazilian Olympic diver Ian Matos passed away at the age of 32 following a two-month hospitalization for a lung infection, which had developed shortly after his COVID-19 vaccination.

Brazil’s Olympic Committee said in a statement after his death:

“We are profoundly saddened to have received the news of the premature death of the Olympic diver Ian Matos, aged just 32.

Team Brazil acknowledges his contribution to the evolution of the discipline.

Our sincere condolences to his family and friends.”

The Olympic diver had previously won three bronze medals at the 2010 South American Games before competing in the men’s synchronized three-meter springboard competition at the 2016 Summer Olympics in Rio.

Australian Olympic cyclist Sarah Gigante developed heart problems in August last year, just days after having participated in the 2020 Summer Olympics in Tokyo. Gigante was repeatedly hospitalized and eventually diagnosed with myopericarditis, which is a combination of inflammation of the heart muscle and pericardium, the sac surrounding the heart.

The 21-year-old had been fully vaccinated prior to the health scare.

Gigante was asked in a Q&A last year if she believed that her heart condition was a result of the COVID vaccine, to which she responded:

“I don’t know what triggered my sickness (and there are many prospects – some individuals within the feedback part appear positive that it was the COVID vaccine), however it doesn’t matter what it was, the actual fact is that I was extremely unfortunate.

I simply need to say that vaccines work, and these vaccines particularly save lives. I’m very lucky to have been in a position to be protected towards the horrible illness that’s COVID-19 and I encourage everybody who has the chance to embrace it with open arms and a raised sleeve.”

Argentinian striker Sergio Agüero announced his retirement from football last month after he was diagnosed with a severe heart condition. The 33-year-old striker tearfully described it as ‘one of the most difficult moments in his life.’

“I have decided to stop playing professional football. It is a very difficult moment.

The decision I have taken is for my health; after the problem [heart condition] that had started a month and a half ago.”

Agüero’s first medical issues surfaced in October last year when he was hospitalized after a league match against Alaves, in which he experienced chest pains and breathing difficulties.

The Argentinian striker had been very supportive of the COVID vaccines, promoting it strongly on social media and encouraging the uptake of the jab in children as young as 5-years-old.

Daniel Aakervik: 17-Year-Old Norwegian Skier Was Forced To Suspend His Season After A Severe Reaction To COVID-19 Vaccine

Norwegian cross country skier Daniel Aakervik was forced to suspend his season last year after developing health problems caused by the COVID-19 vaccine. Aakervik said he ‘immediately felt something was wrong’ and stated that doctors had told him that it was ‘probably a side-effect of the vaccine.’

The 17-year-old recently shared that he has returned to competitive activity, writing on his Instagram:

“After a tough autumn, it is good to feel that the body is working again and I hope to take a victory in the Norgescup.”

College basketball player Richard Harward announced his leave from the sport last month after he was diagnosed with blood clots and a heart condition as a result of the Pfizer COVID-19 vaccine.

The BYU Cougars player said about the ordeal:

“The condition affecting my heart has developed further complications. For my health and safety, it has been determined I will be out for the remainder of the season.”

It is yet to be seen whether Harward, who was previously in peak condition, will ever recover.

Australian UFC fighter and jiu-jitsu world champion Craig Jones had to drop out of a fight last year after suffering a serious injury from his first dose of the Pfizer COVID-19 vaccine that had caused his stomach to fill up with fluid.

Jones posted this on Instagram three days before the fight.

“I’m out guys. One of the unlucky ones that had an adverse reaction to the Covid vaccine. I won’t bore you with all my symptoms but ended up carrying a bunch of fluid around my stomach and can’t train let alone compete.”

The Australian fighter, who has a black belt in Brazilian jiu-jitsu, is considered one of the best grapplers of his generation by winning numerous prestigious events, including multiple belt titles. Jones also finished 2nd place at the ADCC World Championship in 2019.

While climbing the ranks of jiu-jitsu, competing internationally, the 29-year-old has also managed to graduate with a degree in Behavioural Science (Psychology).

Scottish football player John Fleck collapsed and convulsed during a league game in November last year and was rushed to hospital. Fleck, who plays as a midfielder for English club Sheffield United, had received his second dose of the COVID vaccine in August last year.

The Dailymail published an article shortly after the incident saying that ‘scientists had confirmed‘ that Fleck’s collapse was not due to the COVID vaccine. However, no details were given about how that conclusion was reached except for a sports cardiologist, Professor Guido Pieles saying:

“At present, I would say this is still a coincidence.”

Fleck began his career with Glasgow Rangers and made his senior debut in 2008 at the age of just 16. He joined Sheffield United in 2016, helping the club achieve two promotions in three years, moving up from League One to the Premier League.

Norwegian Olympic athlete Filip Ingebrigtsen suffered a ‘debilitating’ reaction from the COVID-19 vaccine that lasted for over seven months.

Ingebrigtsen, who runs in the 1500-meter competition, performed far below his usual level at the 2020 Summer Olympics in Tokyo, with no obvious explanation from him and his team. However, tests later revealed that he was suffering side effects from the first COVID jab he had received in March 2020.

When questioned in October last year about the vaccine, the 28-year-old said that he ‘would have done the same thing again’, reflecting a somewhat stoic attitude to his ‘negative results’.

“In retrospect, when you get negative results and that puts limits on whether you can do your job, you regret it. But I’m pretty sure I would have done the same thing again.

I feel bad that it has had such a negative effect and I wish I didn’t have these problems. I didn’t know it would turn out like this. Sadly, this time it went wrong for me.”

Bayern Munich basketball player Paul Zipser was hospitalized after he became ill shortly before a playoff game on June 4th of last year. The 27-year-old was diagnosed with a brain tumor on his brain stem a day later and underwent emergency surgery, making his family and club fear for his life.

The German basketball star developed the tumor shortly after he got vaccinated with a single dose of the Johnson & Johnson COVID-19 vaccine.

Zipser has slowly returned to normal life since the emergency brain surgery 9 months ago, however, there remains much doubt whether he will ever be able to play basketball at a high level again. Nonetheless, in a recent podcast interview, Zipser remained optimistic about his career:

“Apart from (proper) contact training, there are still a few things missing, but [my comeback] is just a matter of time now.”

Zipser was selected by the Chicago Bulls with the 48th overall pick in the 2016 NBA draft. The German scored a career-high 21 points that same year in a 112–73 win over the Brooklyn Nets.

Swiss marathon record holder and Olympic athlete Fabienne Schlumpf was diagnosed with myocarditis earlier this month after she got vaccinated with the COVID-19 booster shot.

Schlumpf, who is specialized in the 3000 meters steeplechase, had reported feeling ‘fatigued‘ in everyday life shortly after the third shot.

The 31-year-old is now unsure when she’ll be able to compete again:

“Nobody can say for how long I have to put my career on hold.”

The Swiss athlete had previously won a silver medal at the 2018 European Championships and is the current Swiss national record holder at the 3000 meters steeplechase with a personal best of 9:37.81. 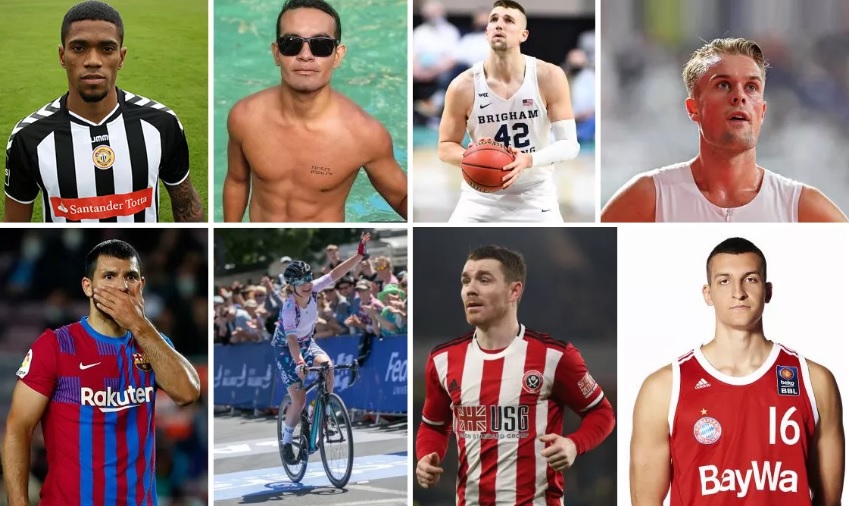