Jamie McIntyre is a man on a mission, for the past few decades he has managed to cement himself as a pundit and player in a number of industries from property to motivational speaking, politics, and education. An avid free speech advocate, the entrepreneur has turned his sites on the modern soapboxes and their perceived biases with the launch of Truth Group.

The company is an ambitious response to the increasing restrictive nature of globalised platforms, particularly throughout the pandemic and its subsequent restrictions and updates. With its roots firmly in the frame of anti-censorship. He took the time to answer a few questions about the movement, his own views on the pandemic reportage, and where the group is going from here.

Hey Jamie, thanks for answering a few questions, let’s start with you telling us a bit about yourself?

I’ve been a serial entrepreneur since the age of 21, and built a dozen companies over 2 decades, with a passion for building a modern-day education system. Which led me to becoming a motivational speaker, educating on success psychology & strategic ways to grow one’s career or businesses.

I have invited high-profile entrepreneurs / leaders such as Sir Richard Branson, Arnold Schwarzenegger, bestselling author of the 4 min Work Week Tim Ferris, or Australian entrepreneur Mark Boris or Ruslan Kogan of Kogan.com fame to lecture to my students as having a PhD in results verse just theory we learnt at school, I believe was critical to outperforming.

I became a millionaire through property mostly, but also after writing a dozen books, I was one of the first authors to write about a little-known digital currency called Bitcoin back in 2012 and predicted it would go from under $100 AUD to $10,000 then $100,000 AUD (it hit almost $100,000 AUD late last year). I built a reputation on predicting trends well ahead of time.

I also invested into not-for-profits to help change society and funded the first newspaper in decades to launch in Australia, the Australian National Review. I did this as I felt Australians and westerners were being propagandised to by mainstream media which had fallen into the hands of only 6 major Global Companies which were blatantly pushing their elite Billionaire owners Globalists Agenda’s, and this would within a decade become dangerous for Western societies.

I also launched a political party called 21st Century to help improve our nation back in 2013.

This led me to becoming a government target for exposing some corrupt politicians such as Sam Dastaryi who had to later resign in disgrace for taking Chinese bribes to push their political agendas in Australia.

This led to me becoming an outspoken critic of the Covid fraud pushed upon us by a greedy medical cartel under Fauci and Gates takeover of the WHO. I had earlier exposed this industries fraud in 2016 in my book “The Great Vaccine Con”, after industry whistle-blowers alerted me to major fraud with vaccines, and the cover up of massive death and injuries even before the disastrous roll out of Covid Vaccines.

Many freedom activists and Independent Media owners or journalists started to be banned from Big Tech social media companies which the Intelligence Agencies demanded them to censor anyone not supporting the false Government narrative about the Covid supposed pandemic.

What is the concept and drive behind the Truth Group in general, and how does it play a role in Truthbook.social?

This led to the drive to launch censor free social media platforms after being continuously banned off social media, for simply questioning the blatantly false Government narrative about Covid. Their lies that the jabs were “safe, effective and necessary” despite record deaths and injuries were also ban-worthy. Not to mention, no medium or long-term safety data.

Plus, the short-term data Pfizer tried to suppress, and when it was discovered, it showed them and Fauci, had once again covered up and approved experimental drugs that benefit the drug companies at the public’s cost. See the New York Times bestseller “ The Real Anthony Fauci” by Robert Kennedy Jr for so much evidence of fraud.

So TruthGroup grew out of its first platform Truthbook, which was a censor free Facebook alternative.

Now TruthGroup is soon to provide a censor free platform for every major social media company, including an alternative for Instagram (Truthpix) Tik Tok ( Truthtok) YouTube ( TruthTube.video ) Telegram (TruthGram ) and its own search engine Truthlook.com.

It’s very ambitious to have so many competitive platforms to the big conglomerates, how are you approaching awareness and audience building?

It’s grown to tens of thousands of users already, organically in its soft launch stage. This is mostly from the fact we predict about 30% of the population detest Big Techs censorship and support the Freedom movement or perhaps more.

Thousands continue to join monthly from word of mouth. We will start to market to wider audiences soon but are careful to not grow to fast as that can hurt the user experience if delays like what Trumps platform has suffered.

Unlike Facebook, we have passionate raving fans, who feel deeply concerned about the direction society is heading from the Globalists Great Reset Agenda being pushed by Klaus Schwab, the head of the World Economic Forum. It is like an effective cult for excessively rich elite billionaire’s, who think “we should own nothing and be happy “(while they own everything) and we should look forward to eating insects and bugs and watch our carbon footprint (while they scoff down the best oysters and caviar and fly into Davos for their yearly gabfest on gas guggling jets).

What is your stance on free speech being the foundational element in perceiving the digital age?

Free speech is absolutely critical to a successful society, and we only have listened to those who are saying otherwise to know why we must defend it at all costs.

Dictators and closet communists want to ban free speech as to ban those who refuse to accept their political ideology, they seek to push upon everyone.

Do you have any particular measurements in which content could be banned or redacted? If so, what would be considered credence for removal?

What should never be censored is political diversity . As currently big tech is censoring the views of anyone that’s not extreme left wing.

At present unless you support an extreme dangerous left wing political agenda, including accepting transgender propaganda being pushed on children at school. Plus, be willing to roll your sleeve up for yet another vaccine as the first 3 didn’t kill them yet as hoped.

As the supposed “safe, effective and necessary vaccines”, clearly don’t work, so you have to have more, wear a mask, accept lockdowns, and accept the pseudoscience ,pushed by a fraudulent industry, which owns our Governments via the corrupted NGO in the World Health Organisation which is funded and run by Gates and his fellow vaccine cronies who have profited by tens of billions (Gates some $20 billion during Covid from his public health investments which have little to do with public health, then you will be censored.

So, censorship as we have seen, has been done to silence the truth, and silence anyone with an opposing view to the extreme left of the Globalists billionaire elites. These elites have used Covid as a Trojan horse, to try and usher in their totalitarian Great Reset Agenda under the guise of what is now known of a “over hyped falsified pandemic, no worse than a flu”.

Of course, any violent posts or child pornography etc or distasteful language can be censored, as users would understandably want censored for the benefit of maintaining the user experience.

Yet Big Tech seems comfortable in allowing paedophile propaganda, Neo Nazi’s in Ukraine, and even TV hosts in Ukraine threaten to kill or be violent to Russians, kill their children, as somehow acceptable. But dare to post that you are sick after the experimental jab, and you’re banned.

Like Elon Musk has said, we should allow others to have an opinion, even if we may not agree with it.

Big Tech’s role with social media or independent social media should never be pushing false narratives that the elite billionaires tell them to. Nor should it be censoring the middle or conservative side of politics as has been happening or labelling them “domestic terrorists” for protesting the removal of civil liberties and human freedoms, over what’s turned out to have been a rebrand of the magically disappearing “flu” for 2 years (renamed as Covid).

There have been recent cases surrounding successful defamation cases that involved platforms being sued as distributors of content, what is your take on this precedent?

I think social media companies must do more to stop blatant false attacks on a person’s character, or scams being run, using profile names that are knowingly scams.

But we must ensure these new laws proposed for social media aren’t abused, to become a Globalists censorship method, pushed via the Government’s as we have seen in recent years.

Social media platforms are for people to post content and opinions, not for social media companies to use “opinion checkers disguised as Fact Checkers “, as Facebook does. In a recent court hearing, they had to admit they aren’t fact-checkers but in fact opinion checkers (extreme left leaning ones at that).

Cancel culture and Political correctness and fact checking are all “blatant censorship”.

Only those who wish to hide the truth from the public, such as how many are dying, or sick from a certain Phase 3 experimental drug pushed upon healthy people, wish to conceal the truth.

We need free speech now more than ever, and I support Elon Musk’s attempts if he is genuine, to fix Twitter, and make it free speech platform again. We already have www.truthtweet.social which I think is better than Twitter as it’s not censored, it has an edit button and 1000 characters versus 240 on Twitter.

As you are more of a grassroots movement, where can supporters send donations or support?

We are a fast-growing grassroots movement, as is the freedom movement in general.

People can support us by joining Truthbook, by downloading the IOS or android apps or most join via the website www.Truthbook.social. As it’s only a matter of time before Big Tech bans the apps like they did to Parler.

Or they can check out all our platforms at www.TruthGroup.social and either make a donation or Sophisticated Investors can apply to be considered to become involved as equity partners or freedom influencers can earn equity in the group to bring their followers onto the platforms. Others such as crypto fans, can support Truthcoin www.truthcoin.social the cryptocurrency partnering with the TruthGroup.

What is the ultimate end goal for Truthbook and the Truth group?

The ultimate goal is to become one of the leading censor free social media companies Globally, to help usher in the “Great Awakening “. In the interim to become a billion-dollar company, within 5 years or less, to help defend against those seeking to ban free speech, and to help be a platform where the truth will set us free from the Globalists Totalitarian Great Reset Agenda, which “you’ll own nothing and be happy “. This sounds a lot like communism to me.

Its success can help fund the freedom movement, and independent media Globally, and enable the world to overcome the current attempted Globalist coup which is a dangerous threat to humanities future.

The truth must never be banned and the www.TruthGroup.social will stand up for the truth.

Thank you Jamie for your time! 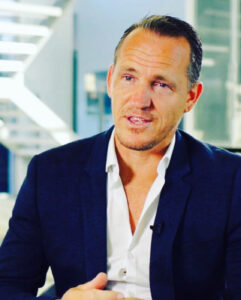