She shows microscope images of one of her patient’s blood before they took the vaccine. It showed perfect blood cells. However, after they took the vaccine, the blood showed a very severe stacked rouleaux. This is very bad, because the clumps of red blood cells are too large to enter in the tiniest blood vessels which are called capillaries. Now the surrounding tissues of for instance the heart or the brain can’t get oxygen.

This patient wasn’t the only one. All other vaccinated patients with symptoms showed severely deformed red blood cells.

In the vaccine fluid, Botha also found disks that seem to be joined together. She consulted with colleagues, but nobody has any idea what these disks are, although there is some speculation. When the fluid dried, the disks changed shape into a totally different but organized structure.

Botha has never seen anything like this in the 15 years that she’s been examining blood. Due to the uniformity of the disks, it’s highly unlikely that they’re air bubbles. She has seen air bubbles in blood before, and they look totally different. It’s highly likely that the disks are engineered.

Botha is doing everything in her power to convince parents to NOT let their children get vaccinated.

One of her patients was one of the earliest recipients of the vaccine. He had 8 heart attacks in 5 hours and has been in the hospital since March and is not feeling well at all.

Botha and other doctors who have not been personally injected, also seem to have weird symptoms when they’ve been in close contact with vaccinated patients. An example is hormonal issues.

Note: dr. Richard Flemming believes that so-called vaccine shedding is unlikely, but it could be that vaccinated patients excrete lots of pheromones which cause hormonal irregularities in close contacts.

Botha developed a safe protocol for jab detox that includes n-acetyl cysteine (NAC), glutathione, zeolite, molecular hydrogen and ozone therapy. She has experienced personal benefit from this protocol and so have her inoculated patients. The patients experience less headaches and have less blood clotting. Patients who have blood clotting also receive anti-clotting medication for their issues, which likely also has a positive impact. 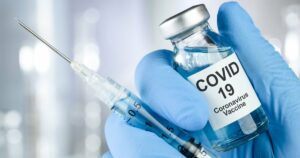 PrevPreviousWhite House Concrete Security Wall Erected, No Information Released As to Why
NextDr Wiseman’s Damning ‘Quasi-Vaccine’ Efficacy Data Ignored by the FDA and the CDCNext