Senator Heffernan and the 28 Men Accused of Evil

Senator Heffernan and the 28 Men Accused of Evil

By In the Interests of the People

19,494 views May 6, 2022 Adams and North do not shy away from the uncomfortable conversations. In March 2021, ITOP did a show titled: “Dark Australian Forces Refuse to Save the Children”.

In this particular program, we covered the allegations which former Senator Heffernan made in Senate Estimates in 2015

In these past few years, this issue has become a major deal among a large section of voters even though the Federal Parliament and the mainstream media refuse to cover the issue. The allegations of a systemic cover-up of criminal activity involving children are perhaps the most serious of allegations one can make.

In the past few years, the Heffernan videos has spread on social media like wildfire and caused significant concerns.

The Federal Parliament and the mainstream media honestly doesn’t appreciate how significant this issue is among ordinary Australian voters.

Unfortunately, this issue is not going away and the longer the Heffernan allegations go unanswered, the more these allegations will continue to fester and cause widespread mistrust of Australia’s institutions and undermine democracy and the rule of law.

Adams and North have some news to cover on this. In the past week, Adams has spoke with two senators on this issue – one Coalition Senator and one Non-Coalition Sentaor. 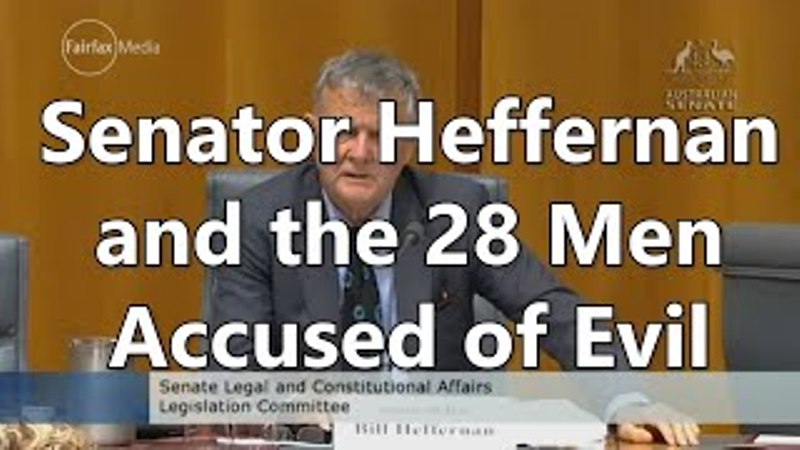 Jamie Frangos
We have a very sick country at the moment, the public needs to make an effort to learn more of these situations, and stop relying on the News Spin Doctors. Thank you to you both for bringing this to the public’s attention. I don’t think the public realizes the depth of strength of you both, to deal with these issues. From the Australian Public……..To say Thank You, is simple not enough. We and our families need men like yourselves very badly.

susan
Well done.. I’ve had enough of seeing people try and fail..this has to be the greatest push of all time to get the garbage out of government & the judiciary..I’m praying..

Joanne Ormerod
The day of reckoning can’t come soon enough, my heart breaks for the thousands of children and I will be putting my vote in with no confidence or independent if I find one that could help get this exposed!

Thawk I
Yes it may be a shock to some , but have you ever wondered if they are prepared to do this too kids what else are these scumbags prepared to do to the rest of us ??? Please wake up people.

Drop Bear
Adrian John Wells and Fiona Barnett can tell you who most, if not all of those 28 criminals are.
Great work. Thank you.

iansuncoast
This place is backwards when we can’t get these pieces of garbage out in the public and have some justice
One rule for us
One rule for them
It has to end!!

Rick Adlam
Great work. We need a real news media, real Journalists and real Politicians in Australia today. They are all becoming extinct in Australia. You guys demonstrate this. Thankyou to you both.

Neil Charnock
I have admired you two for ages now however this has now been elevated to “hero” status. You have gone so far above the inadequacies of economics in this country now. This has to be investigated at least. Very brave!

Public Melody Music
Thank you very much. I think what you have mentioned is the tip of the iceberg. Your courage is much appreciated.

Robert Hill
Absolutely spot on in the direction that this media outlet is taking , and nothing must deter in anyway continuing in this pursuit. It is vital for not only Australia but also a number of other countries that an investigation by thoroughly trustworthy nations investigate without the slightest restrictions , Australian political and Judicial system of Australian governance and , given an obligation to report their findings directly to ALL Australian citizens and Foreign governments , world wide. With Respect , From Robert Of Australia.

Stackmaster 2020
High time to shine a light on these cockroaches and hold them to account.
Kudos to John and Martin.