On January 4, Vaccine-Police leader Christopher Key was arrested and booked into the Jefferson County jail. His crime? Refusing to wear a mask (per his medical and religious exemption) in the court house for a previous trespassing charge, where he’d also refused to wear a mask for the same reasons at Whole Foods in Cahaba Village Plaza.

He was also told that he could not record his own trial. He was thrown in jail because he “refused to wear mask in court room,” Stew Peters reported. “That’s not illegal, that’s not a crime. Where is the statute?” More on his arrest later.

Now, the LA Times has published a hit piece on Key, written by Colin Clarke. Really, the article, titled “The newest variant of violent extremism? Using paranoia about the pandemic as a recruiting tool,” is a knock on all of us “right-wingers” who don’t rely on the government to tell us what to think (or what to inject into our bodies), but the main point is to discredit leaders in the conservative, anti-COVID-vax movement, such as Key, and set the stage for more play acting akin to the January 6 incident, not-so-lovingly nicknamed the “Fedsurrection.”

Of course, Clarke couldn’t resist tossing in a little bit about conservatives being white supremacists, but that’s for another article.

“Christopher Key…travels to anti-vaxxer protests around the U.S. with an arsenal of guns and ammunition,” Clarke wrote in his article.

“No he doesn’t,” Peters said on Monday. “Christopher Key does not travel around the country with an arsenal of guns and ammunition. That’s just inherently false. A made up lie…they’re just lying, pulling it out of thin air and making it a story.”

Clarke continued, writing, “Key spews false information about the COVID vaccine, including that it is experimental and that pharmacists could be executed for administering them.”

“The only false information being spewed here,” Peters retorted, “is from the demonic, globalist Satanists, like the writer at LA Times…” Peters then discussed the fact that the “vaccines” for COVID-19 are not actually vaccines at all, which has been stated time and time again by experts like Dr. Peter McCullough. In fact, Red Voice Media does not refer to them as “vaccines” in our articles based on this information.

Peters also pointed out that the so-called “vaccines” are not FDA approved, and yet there is lie after lie in the mainstream media saying that they are. “There is no [COVID] shot available in the United States of America that has full FDA approval. Period. It’s a lie,” he said.

Clarke said that it is false information that the Covid shot is experimental. “No, that is 100% factual,” Peters said. “An experiment is being run right now. A lethal dosing experiment is being performed on human beings around the globe. The experiment is much more than that of a vaccine. And the communist globalists know that we know this. And that’s why the persecution is proportionate to the effectiveness. They attack this platform, The Stew Peters Show, constantly. Every day.”

Clarke’s statement earlier in the article regarding the right using the pandemic to “recruit new members,” Peters pointed out, is going to be used by the left as a “gotcha” when they recruit and pay their own violent extremists to make them look like “white anti-vaxxers.” Because, Peters said, “these people at the LA Times…are funded by the very people who want subservience from you and from me, who want dominance and control eternally.

“Christopher Key is the least violent person you’ll ever want to meet,” Peters said. “He’s being set up, or he’s being used to set up [someone else].

“This story at the LA Times is a big deal,” he concluded. “Pay attention.”

Back to Key’s arrest. Judge Katrina Ross ordered Key’s arrest, later writing in his order, “Defendant [Key] was advised several times to put on a mask if he wished to address the court and to turn his camera off. Due to his failure to comply with the Orders of this Court, his bond is revoked.”

Peters made his viewers aware of the situation on his show, and many of them stepped up to call the Jefferson County Jail and complain about the unfair and unconstitutional treatment of Key. “Last night I got a conjugal visit from the warden and his lieutenant,” Key told Peters during a phone call from jail. “They wanted to meet me…because they’re getting so many calls from Stew Peters’ viewers on what took place.

“What I’ve done is completely lawful,” he continued. “I would not put a mask on, so I was arrested outside of the judge’s court room.”

Key stated that following the arrest, the bailiff led him through the court room he was told he was not allowed to enter unless he donned a mask, while he was maskless. He said there were about 30 people in the court room at the time.

He was then led to the jail and placed with about 24 other prisoners, also while he was maskless. “Their narrative is falling apart,” he said.

“Make no mistake about it: This judge, this sheriff, this lock-up facility, they would have much preferred to have just kept this very quiet,” Peters said after Keys’ call. “They would have preferred to have just silenced Christopher Key[s], get him out of the way. Make his life inconvenient, scare him, instill fear into him with these intimidation tactics. Jail him…make him go away. Right?

“Because they knew what he was doing. They know what he’s up to. It goes against the narrative of the communists.”

Peters pointed out that the whole situation would have “gone away” if it weren’t for people like his viewers who called the Jefferson County Jail who “started asking questions and poking around. That’s the reason,” Peters said, “that Key got a visit from the corrupt sheriff [Sheriff Mark Pettway] and the corrupt people running this jail.

“That visit was prompted by you [the viewers],” Peters said. “Don’t get it twisted: YOU have a huge impact.”

Peters said he agreed with Key in that it’s time for the media to get involved in the situation. “A free citizen in the United States of America was thrown into a hoosegow,” Peters said, “without being charged with a criminal offense. Without committing a criminal offense. Without breaking the law. Where’s the mask statute? Is that a jailable misdemeanor or felony offense in Jefferson County? I would like to see that. We’ve researched it; we can’t find it.”

Peters called on the media in Jefferson County to report on what is happening in this case, and called on his viewers to reach out to the local media so they can’t ignore it. 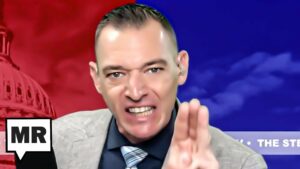